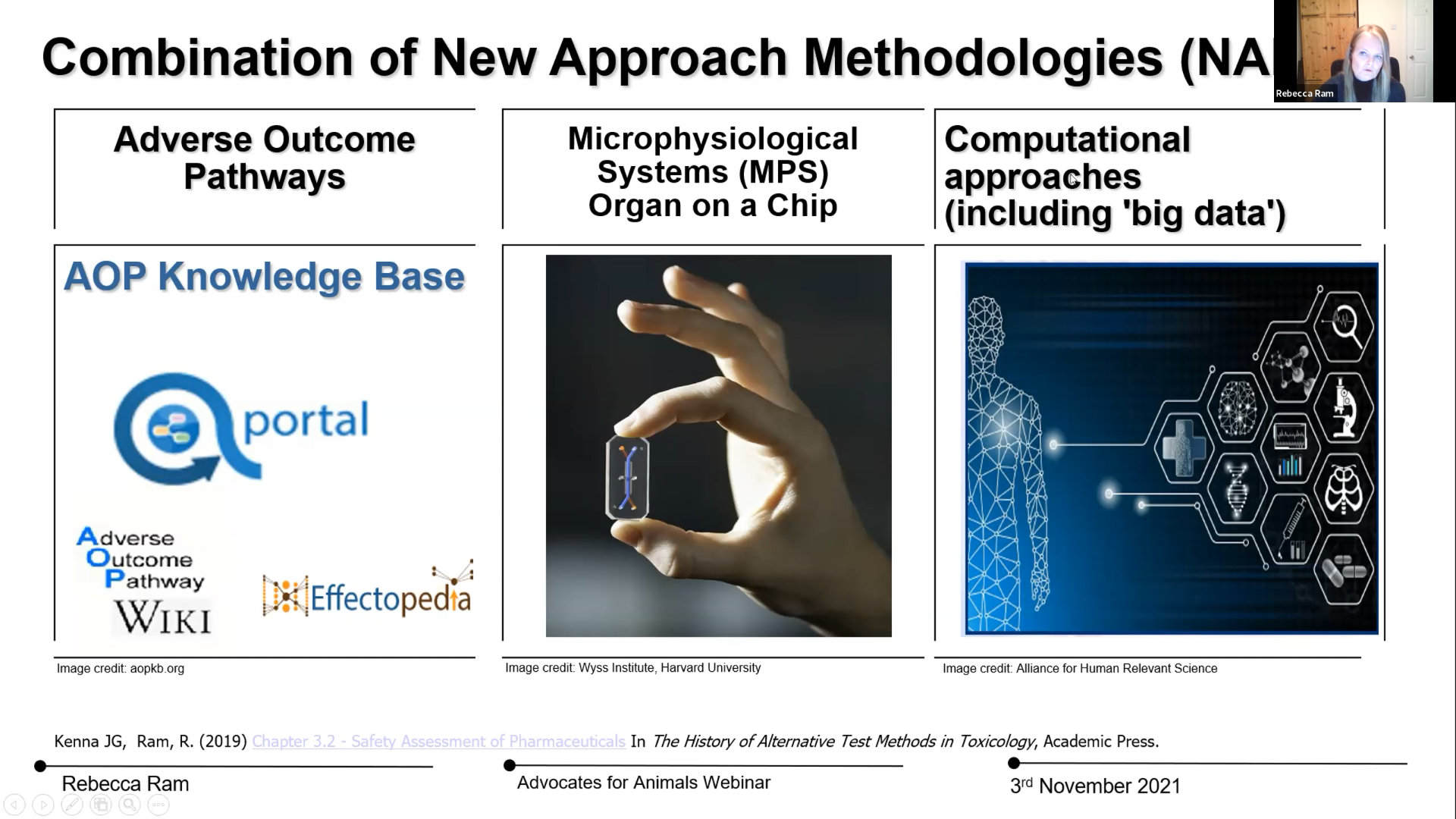 I was pleased to be invited to give a presentation on the issues concerning use of animals in research at a recent workshop hosted by Advocates for Animals, the UK’s first legal organisation devoted to animal protection. The theme of the workshop was “Animal experiments; the law, the framework and the alternatives”.

The topic of my talk was ‘Ending animal testing to advance human relevant research via New Approach Methodologies’ or ‘NAMs’- a term increasingly used to describe modern, animal-free methods. In particular, I addressed the ongoing challenges due to a lack of NAMs funding and regulatory acceptance and how these might be addressed within a legal framework, similar to the EU cosmetics testing bans implemented between 2009 and 2013.  Despite a twenty-year campaign, major setbacks and frustration concerning conflict with other chemicals legislation (e. g. REACH) the bans represent a major legal landmark towards animal replacement and a means of holding the relevant authorities to account.

It’s often noted that there’s a lack of ‘level playing field’ when comparing conventionally used animal ‘models’ to NAMs, with the latter being subjected to a lengthy validation process and frequent bias or rejection, despite proof of reliable and human relevant information on a mechanistic level. Key examples of NAMs include 3D spheroid models, ‘organ on a chip’ technologies and in silico (computer derived) methods. These are three broad categories incorporating countless ‘NAM’ techniques, which can be combined to provide a fit for purpose, clinically relevant picture of human safety and disease.

In contrast, animal tests have never been validated in this way but continue to be used, often in repetitive and routine procedures linked to similarly routine funding sources, despite the well-known limitations of the 3 million animals used each year in the UK (and 10 million across the EU) and acknowledged failure to provide adequate ‘bench to bedside’ translation. As a patient safety organisation, Safer Medicines Trust follows this issue closely, given that clinical trial failure rates exceed 90% and drug side effects are reported to account for more than a million hospital admissions and 10,000 deaths in the UK each year.

Furthermore, less than 20% of animal procedures are retrospectively checked to see if they’ve met their scientific objectives and the public are often shocked to find that the vast majority of animal tests have no legal requirement to be performed.

On a positive note, NAMs are in use to some extent, for example in silico modelling in drug development, or ‘read across’ in chemical safety testing, though often to complement animal use, rather than replace it. NAMs uptake is still on a relatively small scale which is disappointing given that so much more could be achieved with a ‘top down’ government approach, combined with international harmonisation to ensure the global acceptance of all currently available NAMs and the development of urgently needed new ones.

There are infinite business opportunities for NAMs research, optimisation, scale up, training and outsourcing. Risk aversion is understandably a key concern, but this could be safely addressed with trial or pilot studies, used regularly in so many other areas of technology. Such ‘actions instead of words’ for kickstarting genuine progress in human health and patient safety are long overdue.

For further detail, the presentation can be seen here

More harm than good? We need to talk about this!

As a patient safety charity whose raison d’etre is to reduce adverse drug reactions, Safer Medicines Trust is deeply concerned by the incidence of adverse reactions following covid-19 vaccinations. This is not what anyone wanted, following their remarkable development with such unprecedented speed – but it is certainly something that health systems should have been on high […]

By Rebecca Ram Many research methods which focus on human-relevant biology (NAMs) are in use worldwide. However, a co-ordinated analysis of all existing methods that could be harmonised for global regulatory approval, as well as diversion of funding to the development of new methods are both long overdue. Encouraging signs were seen in Europe towards […]