Podcast on “Organ on a chip”

15 minute interview with Dr Jan Turner, who explains how organoids and organs on chips are enabling new knowledge of human biology and disease. These miniature models of human systems provide human-relevant insights and can be personalised to individual diseases, allowing studies that have never been possible before. These infinitely adaptable tools overcome the insurmountable limitations of animal models, ushering in a future of better, more efficient drug development and safer medicines for patients.

Thanks to Cytiva and Dr Jan Turner, our much-missed former Director. 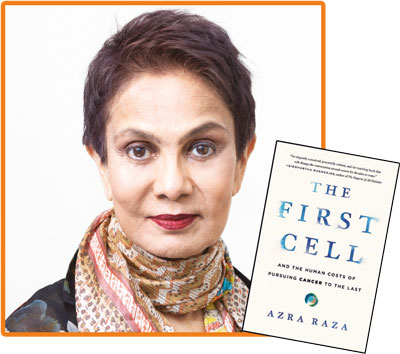 On 27th October, the Royal Society of Medicine in London was the venue for an exceptionally thought-provoking and inspiring  talk by Dr Azra Raza, Professor of Medicine at Columbia University in New York, international authority on leukaemia, acclaimed author of ‘The First Cell: And the Human Costs of Pursuing Cancer to the Last’ (Amazon’s ‘best science book of the year 2019’) and Science Adviser to Safer Medicines Trust.

Dr Raza’s themes were then eloquently expanded upon by Professor Geoff Pilkington, Emeritus Professor of Neuro-oncology at the University of Portsmouth and former Head of the Brain Tumour Research Centre, Member of the Alliance for Human Relevant Science, Trustee of Animal Free Research UK and The Childhood Cancer Charity and Science Adviser to Safer Medicines Trust.

An expert audience then participated in a Q&A chaired by Dr James Le Fanu, well-known columnist and historian of science and medicine, acclaimed author of ‘The Rise and Fall of Modern Medicine’, Fellow of the Royal Society of Medicine and Patron of Safer Medicines Trust.

Dr Raza explained why the global cancer research effort should change direction to:1) focus on prevention and early detection, with the aim of finding the first malignant cell instead of attacking late-stage disease, to which end she has established The Oncology Think Tank and the First Cell Coalition for Cancer Survivors; and

2) focus research exclusively on humans and their tissues, rather than on mice, rats and other animal models. For this purpose, she has founded the First Cell Center, to study her tissue repository of more than 60,000 samples collected from her patients over the past 38 years.

We are so grateful to all the speakers for such an inspirational discussion. The whole event can be viewed below:

Join our new community of practice for medical researchers!

A one-of-its-kind online community aimed at improving communication among biomedical scientists has been launched by the Alliance for Human Relevant Science and Animal Free Research UK.

The Animal Free Research Community of Practice is an interactive network for members to share their work, ideas, challenges and passion among likeminded peers.

With free membership for academic and early career scientists, students, industry and other stakeholders involved in biomedical research, members can interact online 24/7 as well as attend planned events, including open houses, roundtables and Helpathons.

New members can sign up and join the community by clicking here: Join the Community of Practice

Members are invited to create and add content to the online forum, share events and resources, and to collaborate on projects such as writing reviews, articles and much more. The Animal Free Research Community of Practice will bring scientists closer. It will raise awareness, deepen knowledge, drive creativity and spark passion for a science that benefits animals as well as humans.

We urge all who want to practice modern medical research – that which truly delivers benefits for human health – to sign up and become part of this important, exciting community.

A History of Regulatory Animal Testing: What Can We Learn?

A new paper in the 50th Anniversary issue of Alternatives to Laboratory Animals, co-authored by Dr Jan Turner, analyses the origins of regulations requiring animal safety tests for new medicines and whether they were justified then or now.

The thalidomide tragedy shocked the world and led to new laws requiring ‘proof of safety’ in animals, despite the irony that it was thalidomide’s near-total safety in animals that helped to cause the tragedy and would not have prevented it. This new analysis shows that moving away from animal testing is limited not by scientific possibilities, but by historical precedents and persistent beliefs that animal tests will prevent future tragedies. No amount of animal testing can eliminate the risks inherent in introducing new drugs to the market. Regarding animal tests as the gold standard gives a false sense of security, which acts as a barrier to creating potentially safer medicines and leads to human health risks, as well as the use and killing of many animals without a sound scientific basis.

Greater public and political awareness of the risks to public health that result from a continued reliance on animal testing can contribute to a shift in paradigm toward increased reliance on human-based safety testing. For scientists and regulatory bodies to contribute effectively to the transition away from animal testing, it is important that they continually reflect upon, and highlight how, an (often implicit) belief in animal testing as the gold standard continues to affect research, education, regulations, funding practices, etc. This should include a critical reflection on the 3Rs paradigm, as well as the critical perspectives of scholars from the humanities and social sciences, all of which are needed to break free from the confines of the current paradigm.