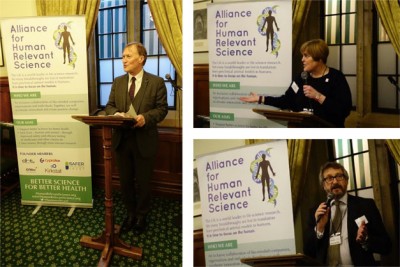 We were very proud to launch the new Alliance, along with our founder partners: Dr Hadwen Trust, Kirkstall, Cyprotex and CN Bio Innovations.

Sir David Amess MP hosted the launch event, which was full to capacity with senior scientists and MPs whose enthusiasm and support were palpable.

Working together, the Alliance will help to speed the transition away from animal testing, towards more efficient and predictive models based on human biology. Many breakthroughs are lost in translation from animals to humans. There is now a tremendous opportunity to make drug development faster and safer, using human relevant technologies. Some exciting technologies were highlighted at the meeting, including cutting-edge models of the liver, linked together with other organs to realistically mimic the human body.

Sir David said: “Britain is a world leader in life science research. But we had better look to our laurels if we do not want to be left behind, while others take the lead in embracing more predictive tools based on human biology. I wish the new Alliance every success with this hugely important initiative.”